IBM Security Verify (formerly IBM Cloud Identity) helps you secure user productivity with cloud-delivered Single Sign-On (SSO), multifactor authentication, and identity governance. It can be configured to act as an identity provider for the IBM Application Gateway (IAG) by:

The IAG provides a native OpenID Connect relying partner (RP) capability that is able to consume an identity token which has been provided by the IBM Security Verify OP in order to establish an authenticated session.

The OIDC specification states that authentication can follow one of three paths: the Authorization Code Flow, the Implicit Flow, or the Hybrid Flow. The flow determines how the ID Token and Access Token are returned to the Client. The Authorization Code Flow and the Implicit Flow are described below (please note that the IAG does not support the Hybrid Flow).

The Authorization Code flow is the default and recommended flow for the IAG, but it does require direct connectivity from the IAG container to the IBM Security Verify OP. If direct connectivity is not possible the Implicit Flow may be used - although this flow is not recommended and is now considered a security best practices anti-pattern. There are two subtle variations to the Implicit flow, differentiated by the originator of the self-posting form (this form is used to POST the authentication tokens to the RP): 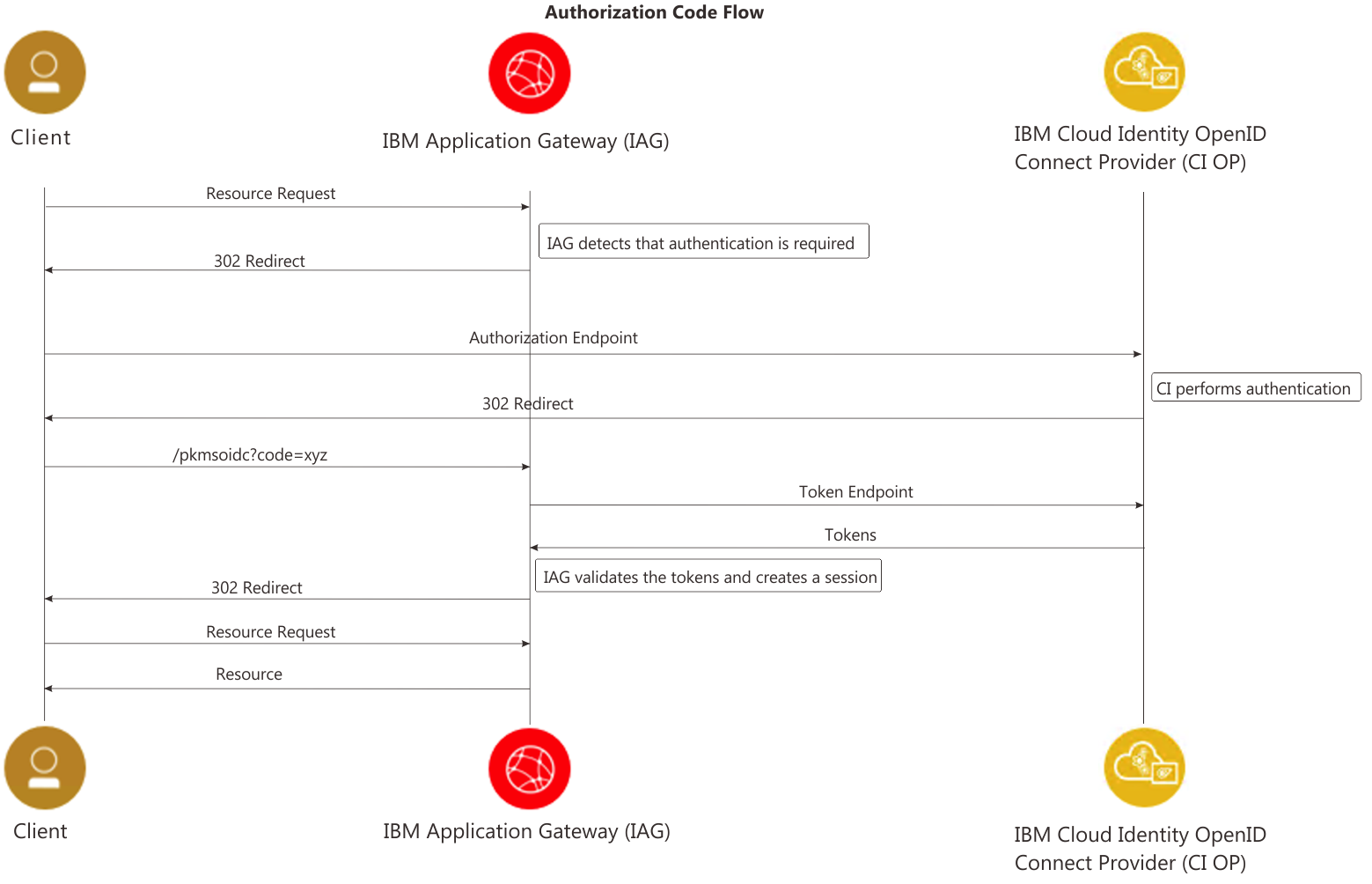 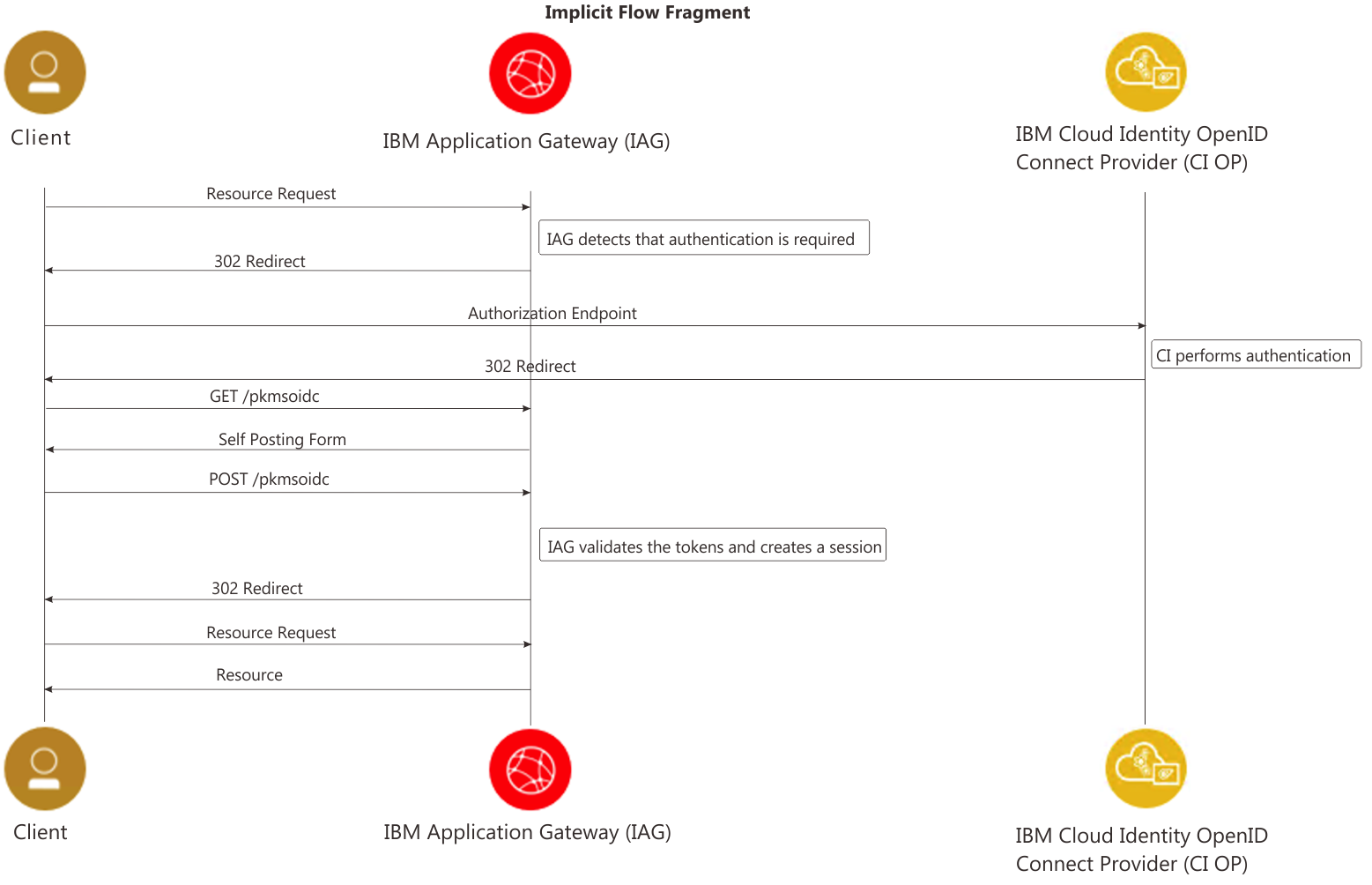 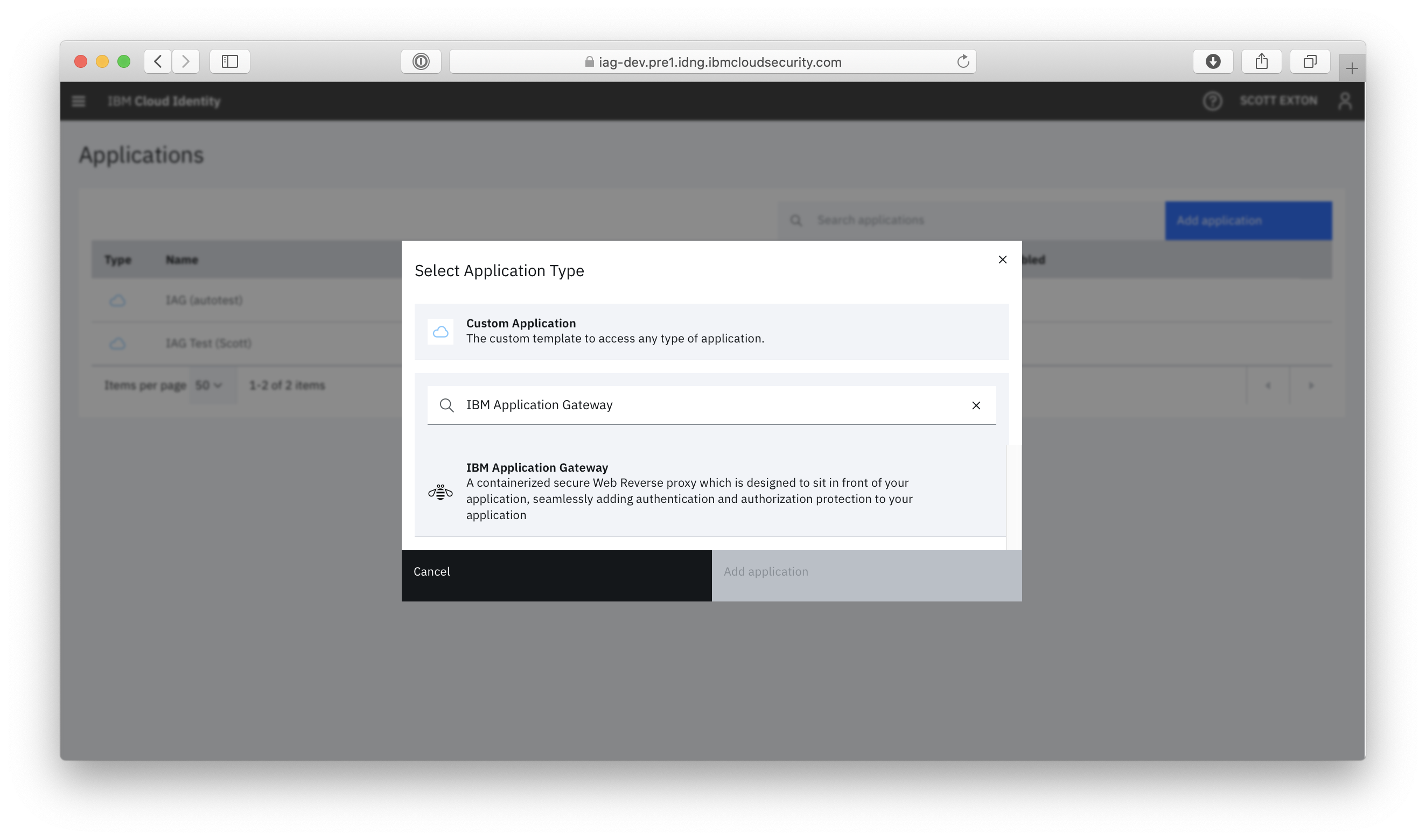 Information on how to create an application can be found in the IBM Security Verify documentation: https://www.ibm.com/support/knowledgecenter/en/SSCT62/com.ibm.iamservice.doc/tasks/t_applications.html#t_applications__create_app.

The application configuration screen will have some of the application fields pre-configured for IAG. At a minimum the following sign-on fields will need to be provided: 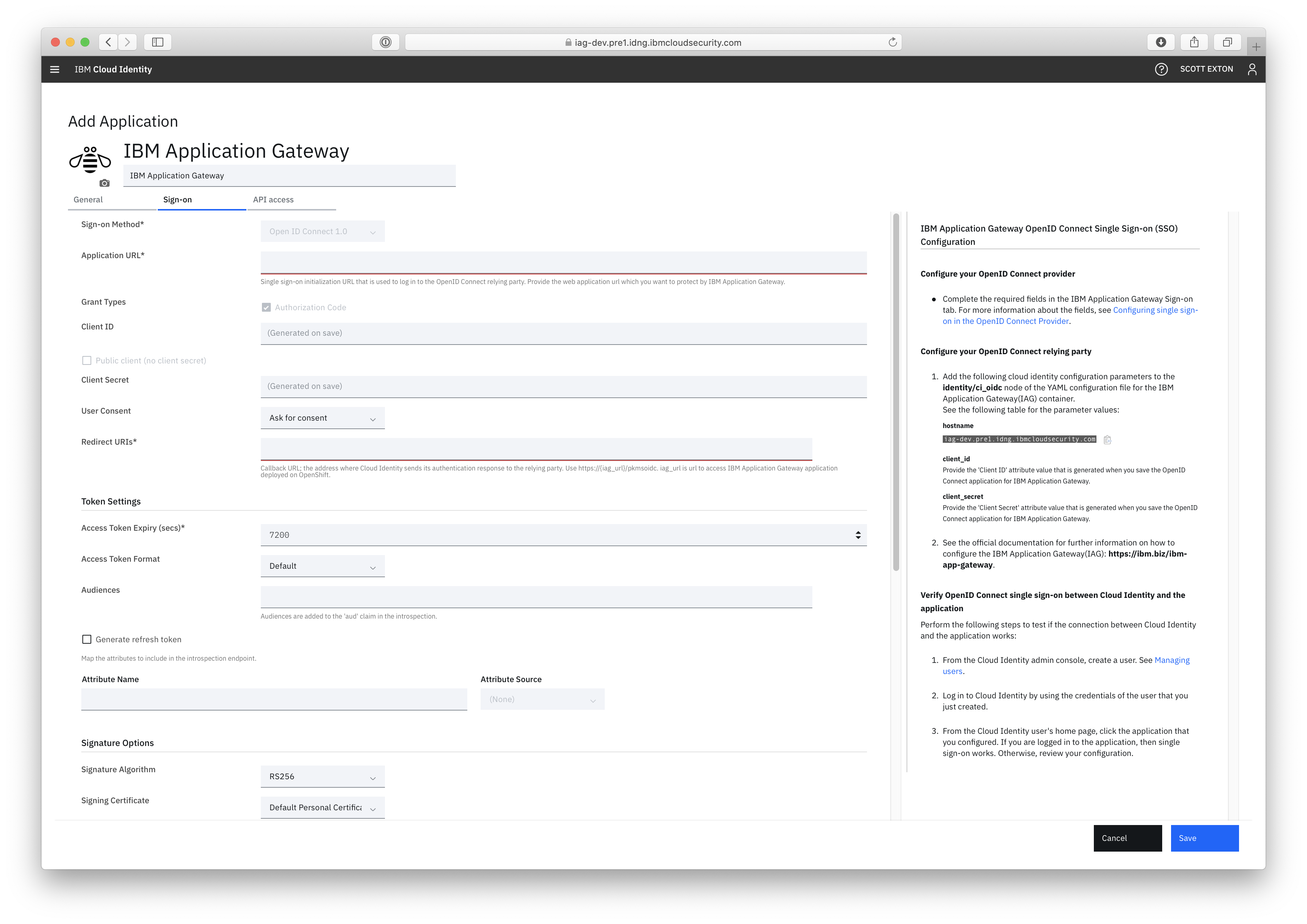 In order to configure the IAG to act as an RP the following IBM Security Verify information will be required:

The following initial tasks should be completed in order to protect a Web application using IBM Security Verify:

An example configuration YAML file which illustrates this scenario is available at: ../examples/authorization.

Bearer Tokens are the predominant type of access token used with OAuth 2.0.

A Bearer Token is an opaque string, not intended to have any meaning to clients using it. Some servers will issue tokens that are a short string of hexadecimal characters, while others may use structured tokens such as JSON Web Tokens.

The IAG can receive an OAuth Bearer Token in a HTTP 'authorization' header, and then call out to an OAuth introspection endpoint to validate the bearer token. The information contained within the introspection response is then used to establish an authenticated session.

The first thing which an API client must do in the flow is obtain an OAuth Access token from the OAuth identity provider. If IBM Security Verify is the identity provider this can be achieved by accessing the token endpoint (https://{tenant}/v1.0/endpoint/default/token). An example curl command which illustrates how to retrieve an Access Token from IBM Security Verify is available in the product documentation: https://www.ibm.com/support/knowledgecenter/SSCT62/com.ibm.iamservice.doc/concepts/get_access_token.html.

This access token can then be provided as a Bearer Token to the IBM Application Gateway in the 'authorization' HTTP header of the request. For example:

The following diagram highlights the flow: 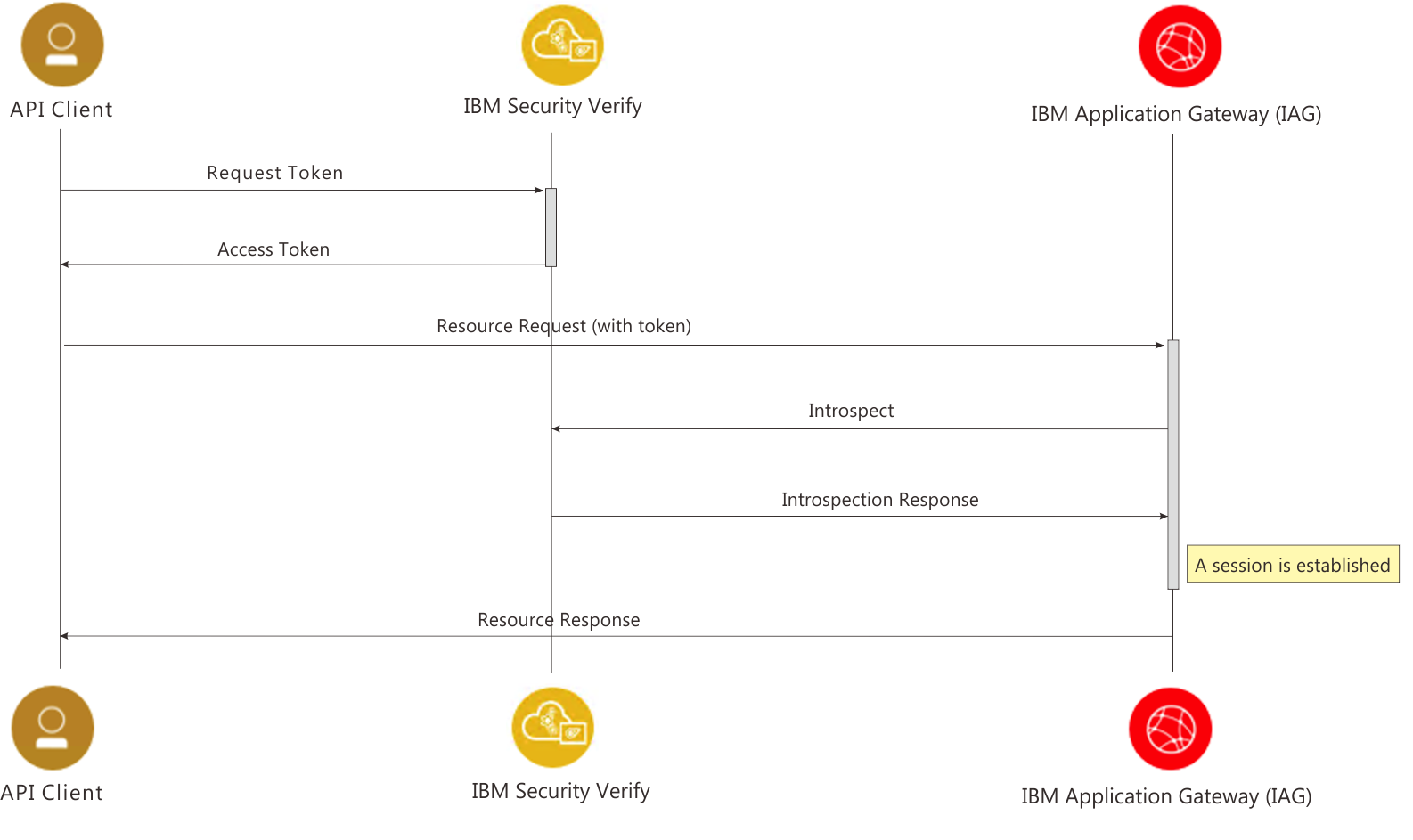 To support OAuth introspection you first need to create an API client for IBM Security Verify using the 'API Access' tab from the Configuration panel of the management UI: 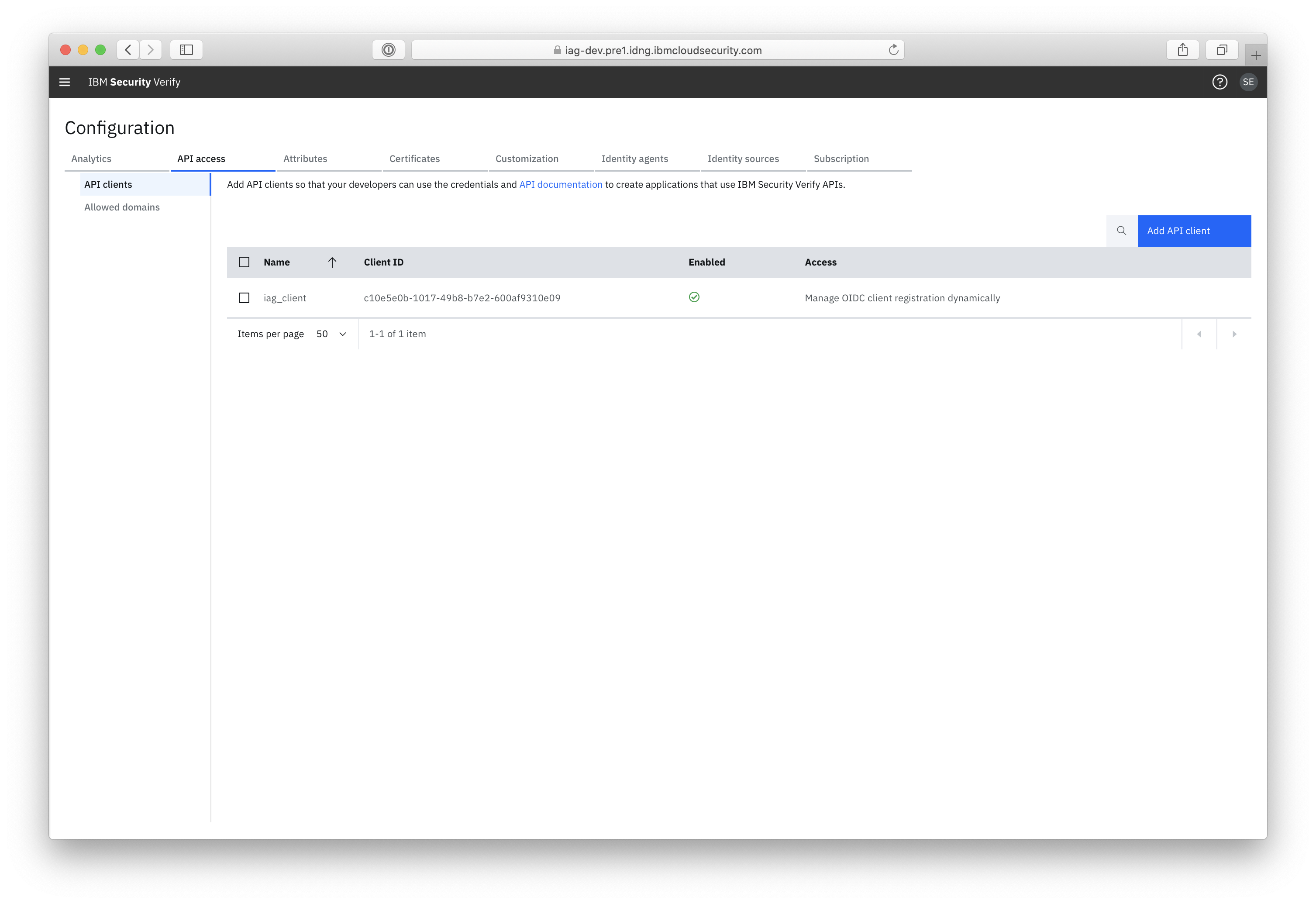 Information on how to create an API client can be obtained from the product documentation: https://www.ibm.com/support/knowledgecenter/SSCT62/com.ibm.iamservice.doc/tasks/api_clients.html#api_clients.

In order to configure the IAG for OAuth token introspection the following IBM Security Verify information will be required:

The following initial tasks should be completed in order to protect a Web API using IBM Security Verify:

An example configuration YAML file which illustrates this scenario is available at: ../examples/oauth.