In most production environments it is expected that the IBM Application Gateway (IAG) service will be replicated for load balancing and high availability purposes. When a user is switched from one replicated IAG service to another it is important to make this a seamless experience for the user, without requiring them to provide their authentication information again.

There are currently three mechanisms by which the user can be re-authenticated to the IAG service:

If the environment is using an external identity provider (for example, IBM Security Verify) it is possible to re-establish the IAG session from the current session at the Identity Provider, as depicted in the following diagram: 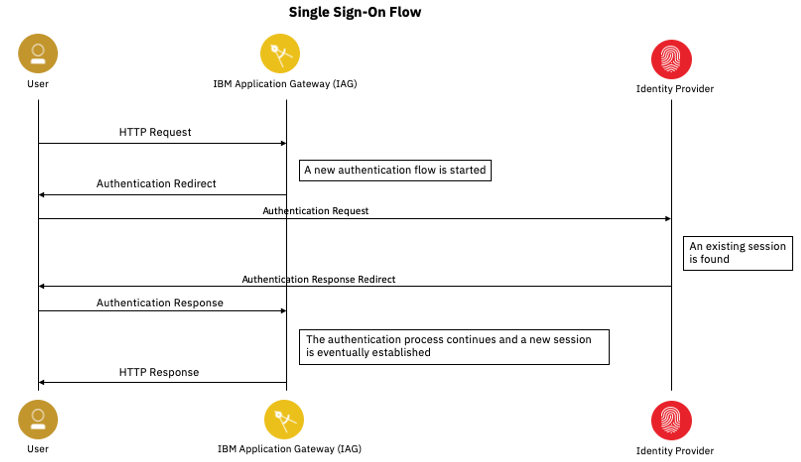 Some of the disadvantages of this approach include:

Another option is to enable the IAG failover cookie. This failover cookie will contain a copy of the established user credential, along with the time at which the current session will expire, encrypted as a JSON Web Encryption (JWE) token.

The following diagram depicts the flow when the JWE failover cookie is enabled: 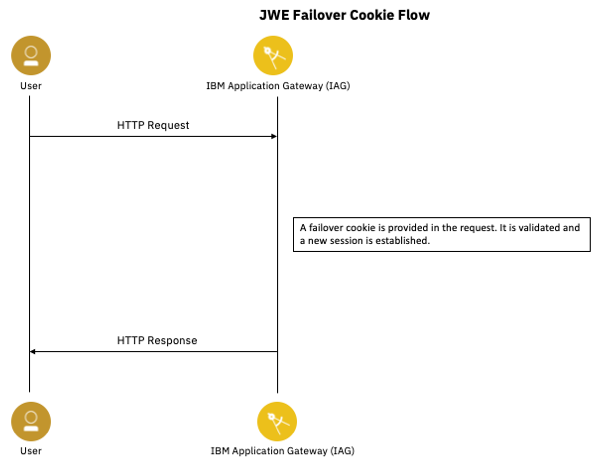 The main advantages of using the JWE failover cookie are:

The main disadvantage of this approach is that the failover cookie can potentially be quite large (a typical failover cookie might be 2-3 Kb in size) and this cookie will be sent by the client on every request.

The failover cookie may be larger than what is permitted by any intermediate devices that inspect the HTTP traffic. Settings on these devices may need to be adjusted.

In order to enable the JWE failover cookie the failover node must be added to the IAG configuration YAML file:

The openssl command can be used to produce a key file which contains a random number of bytes:

All IAG instances which want to share JWE failover cookies must be configured with the same key.

The fact that the JWE cookie is based on a well known standard ( RFC7516: JSON Web Encryption ) means that it is possible for a third-party to create a JWE cookie, providing they know the key which is being used to protect the cookie.

When creating the JWE it is important to note the following:

An example python script which can be used to generate a JWE failover cookie is illustrated below:

The output from running this script is as follows:

Further information on using Redis to distrubute session information can be found in the
Sharing Sessions Between Containers topic.